How to Fix Dents on BMW

If you own a BMW, then you will likely be devastated when a shopping cart crashes into it in the grocery store parking lot, or your 16-year-old backs into a pole. In both scenarios, there has been damage done to your vehicle’s exterior. Depending on the severity and location of a dent, it can be more or less complex to fix. Often people attempt to fix such issues on their own, and occasionally they’re successful; however, it is critical that you have such damages assessed by a professional before attempting to fix it yourself. Trying to remove a dent when left to your own devices could result in further damage to the body of the car, and could make what was just a small dent to begin with into a much larger problem. There are a few methods that one can find easily online dictating how to get a dent out of your car without the help of an auto body specialist; however, use caution—these methods don’t work for all vehicles. Here is some basic information about how one may remove a dent and what practices are actually recommended:

Removing a dent yourself is not a method that an automotive specialist would typically prescribe; however, when you take your car to an automotive shop and they want to charge you hundreds of dollars to remove a small dent, you might be tempted to look for other solutions—including leaving the dent alone. For BMW owners even a small dent can be an eyesore, but the aftermath of taking a plunger, dry ice, or boiling hot water to the exterior of your Bimmer is equally frightening. There are special tools that have been designed to help car owners remove dents on their own, and have shown to be quite effective in some cases. These tools, however, do not guarantee that your paint or exterior will not suffer any additional scratches or dents if used incorrectly. DIY methods are not a bad solution for some vehicle owners; however, if you own a luxury vehicle like a BMW, you might want to consider other options first.

The Location and Severity of the Dent

When it comes to auto bodywork, some areas on a vehicle are easier to fix than others. For trained professionals, removing a dent on a bumper, for instance, might have a different protocol than removing a bump on the exterior of a door panel. Paintless dent removal is a typical first approach to removing smaller dents. In this approach, the exterior material (usually metal) is gently shaped back into place. Sometimes the success of this procedure is great, and other times it can still leave visible evidence of a previous dent. The location and severity of the dent on your BMW will determine what protocol an automotive professional should take. However, make sure you consider all of your options before taking action.

As previously mentioned, a small dent can be an estimated fix of hundreds of dollars, and the cost can climb even higher if your auto body shop recommends removing a bumper or believe that it requires a new paint job. Trusting the opinions of the first auto body shop you visit is rarely the right way to go, unless you’ve established an honest relationship with a friendly automotive shop nearby that you can trust. Getting multiple opinions and estimates can give you a well-rounded picture of what the dent requires in order to be fixed, and what shop will treat you and your BMW with the utmost care and respect you deserve. 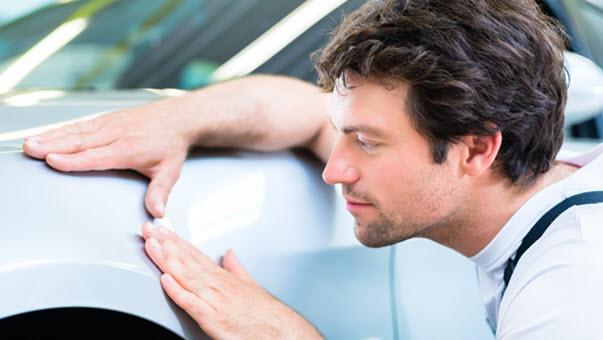 Dent removal can be a precarious process; a lot rests on the expertise of the person who attempts to fix the problem. Therefore, if you own a BMW, a DIY fix might not be the best choice—especially if you want a guaranteed beautiful end result without complication. Furthermore, depending on the incident, your car insurance may cover the cost of the repair. If your BMW has suffered a dent, contact us at A&M Auto Service for a consultation and estimate. We take pride in our auto bodywork and guarantee customer satisfaction at all costs to clients in the Pineville, Greensboro, and Charlotte, NC areas. Furthermore, we share a passion for the BMW brand, and we’ll do whatever we can to restore yours to its former glory.